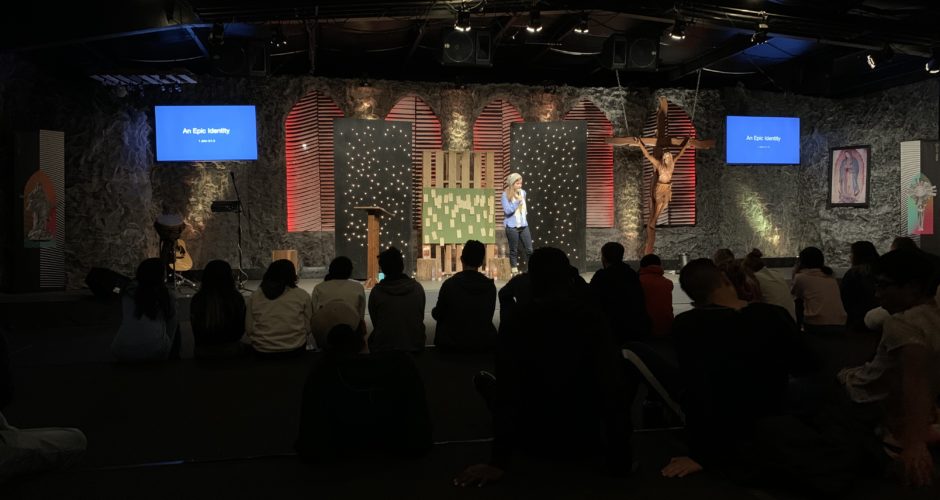 She had a plan – college, ministry work, marriage to a pastor or missionary. Amy shares how her story took a turn when God decided to lead her home to the Catholic Church.

Subscribe and leave us a review on iTunes, Google Play, and Spotify.

Notes from this episode:

If you have a suggestion for an episode topic or just want to say “hello”, you can e-mail us at lostbutholdinghandspodcast at gmail.com.

*This post may contain affiliate links, which means at no extra cost to you, making a purchase by clicking these links helps support what we do. Thanks!

A priest friend posted a picture to Instagram. The picture was a shot of a public transportation track, the angle looking out of the tunnel into the sunshine and the track disappearing in the distance. The focus of the shot was the track in the sunshine.

But what I noticed in the picture, were several people scattered throughout the frame. All of them looking down at their cell phones. All of them.

I dragged my feet at the beginning of Lent, and not much has changed into this second week of the season that is suppose to be one of change and renewal. My phone has been my constant distraction; it’s mere presence leading me away from being present in the here and now. I knew it needed to be sacrificed during Lent. But I don’t want to. As a stay-at-home-mom, sometimes I get lonely. Really lonely. I don’t think that state of being is unique to me and my vocation though.

Connection. That is what I crave (that, and adult conversation). But instead of using my time intentionally, to make real contact with the real humans that exist in my life, I settle for the substitute on my screen. Instead of satisfying my need for connection, the less-than substitute leaves me craving true connection even more.

“They” say that we’re more connected by technology than ever before but as a people we are more disconnected than ever before. It’s no surprise that anxiety and depression rates are higher today than ever before. In those moments where connections are made, were made, like waiting for a train, we’re losing our opportunity because we’re so distracted. And we’ve sedated ourselves from the loneliness and the anxiety with the little screens (and the big ones) that are suppose to be the thing that connects us.

So for the fiftieth time today, I will put my phone down, out of reach, even in the other room. I will strive to be present. I will embrace those difficult moments, lean into them, and maybe, just maybe, I will make space for connection.

This story was submitted by Jessa Barniol and printed with permission. You can find more of Jessa’s writing at 30years30countries30stories.wordpress.com and shalomsweethomeblog.wordpress.com.

It was January 2009, and I was standing in an obscenely long customs line at a Mexican airport. I was worried about making my connecting flight, and so I alternated between the equally helpful actions of rubbing the toe of one sneaker against the instep of the other, frowning at my watch, and nervously picking at the blue polka-dotted shoelace I had tied to the handle of my black suitcase to differentiate it from the hundreds of other black suitcases up for grabs.

My first flight had arrived late.

I was going to have to run to my gate.

I was so absorbed in this cycle that I almost didn’t notice the people in line around me. In a fleeting moment, I glanced at the man directly in front of me, or at least, at the back of his head.

He was a short, nondescript man with brown hair and glasses, and he was already holding his American passport open to the photo page. Rookie, I thought to myself. We hadn’t even turned the last corner of the line, and I, for one, always kept my passport tucked away until the last possible moment.

The man’s traveling companion, another nondescript man in ratty gray sweats with unbrushed brown curls, leaned over and murmured something in his ear. I couldn’t see either of their faces. I glanced at the man’s open passport. Buffalo? No, Ruffalo, I thought to myself. And the first name: Mark.

Oh, man, this poor guy, I thought. It must really suck to have the exact same name as a famous person.

I absentmindedly reached for the shoelace on my suitcase, and my hand froze in midair.

I turned my head to look again at the man’s passport picture, then slowly looked up and caught a glimpse of his face. It was the Mark Ruffalo.

The other man leaned over to murmur something in his ear again, and I gasped.

No one ever told me about nondescript gray sweats and unbrushed curls Orlando Bloom.

We were almost to the front of the line now, and it took me a few minutes to muster up the courage to ask for their autographs. With tight-lipped, polite smiles, they both obliged. And then, as the people in line around us watched Orlando Bloom hand my notebook back to me, everyone suddenly realized who they were. A crush of people pressed in for autographs. (This was still slightly before the time of camera phones and selfies.)

Suddenly I felt bad for having started this avalanche. They both kept the same polite, tight-lipped smiles as they wrote their names again and again for the crush of strangers.

You know what might suck even worse than sharing a famous person’s name? I thought to myself. Actually being a famous person and having to write that name over and over for people who think they love you, even though they don’t know you.

Finally, mercifully, Mark Ruffalo and Orlando Bloom reached the front of the line.

The grand punchline of a Mexican customs line is the “fiscal stoplight,” an actual stoplight with a large button underneath it. You push the button, and you are given either a green or a red light, presumably at random. A green light means go. A red light means a secondary search. Mark Ruffalo got the green light and quickly shuffled through to the other side. But Orlando Bloom got the red light, and all his bags were hauled aside for a secondary search. The officials pulled a plastic box of fruit salad from his backpack and told him in halting English that the fruit could not come into the country. And so he stood there in his gray sweats, shoveling the last of his breakfast into his mouth beside a metal table onto which his belongings were being unceremoniously flung from his suitcase.

As I reached the stoplight myself, an official pulled a pair of gray boxer briefs from his suitcase and flung it on top of the pile of his belongings. Orlando Bloom’s underwear. Orlando Bloom shoved a large cube of cantaloupe in his mouth and chewed quickly, awkwardly. The green light flashed before me, and it was then I realized that famous people are just people too. Even Orlando Bloom.

So I picked up my suitcase and ran to my connecting gate without ever looking back.

If you would like to see a painting inspired by one of your stories, please submit a story to TheGoodStoryProject2019@gmail.com. 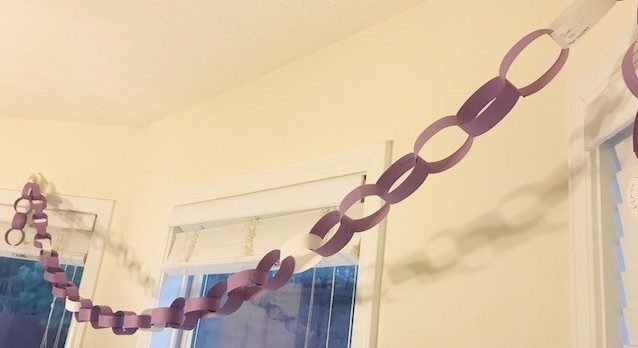 I barely get breakfast on the table before the two year old starts yelling, “PWAY-ER CHAIN! PWAYER-CHAIN!!”.

It took maybe a few days for this routine to set in. Sometimes her brother beats her to it. Either way, the  chanting gets louder and louder until Mommy or Daddy removes a chain link from the prayer chain to see who we are going to pray for today. We originally were doing the prayer chain as a dinner activity, the meal where we were most likely to be all together, but after only a couple days of listening to the kids ask for the prayer chain from morning until dinner, we decided to make it an all day activity. Which means the person or people we’re praying for gets prayed for at all meals and usually bedtimes too. The kids’ enthusiasm has not waned!

Instructions: We use purple (for Lent) and white (for Sundays) construction paper. We cut them into 1 inch strips down the long side of the paper (so 11 strips per sheet). I date each strip on one side and write a person or family (or a cause like “world peace”) on the back for each day. Then I glue the strip in a circle (using a glue stick), connecting each link to the previous link and build the chain as I go. Choose a time when you’re all together and remove a chain link each day and pray for that person. Maybe even text the person or send them a card to let them know they have been prayed for. 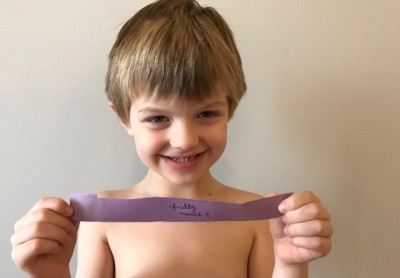 We love the visual of watching the chain get smaller and smaller as we get closer to Easter. We’ve found this to be cheap and simple and easy to execute with little kids. And best of all, it has increased our prayer together as a family.

Have a blessed Lent! 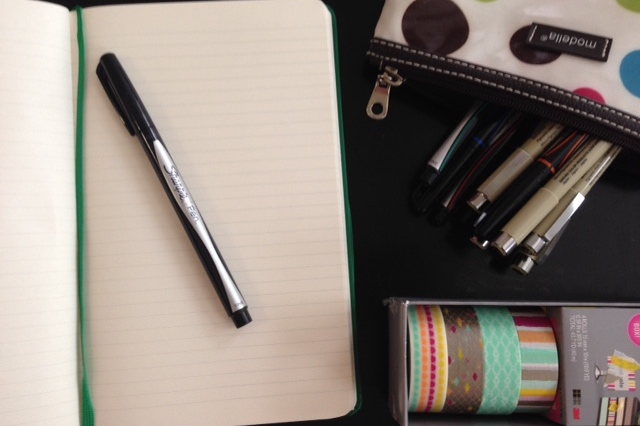 I was perusing Pinterest and clicked on a pin about bullet journaling, and then followed the internet rabbit trail by clicking on the links under #6 on her list. I love discovering the origins of things so I was happy to find that on The Art of Simple, Tsh has the video of the guy who started it all. The cool thing about the bullet journal is that you can hone it to your personal style. Figuring out what worked for me led me down the YouTube rabbit trail where I found inspirations for the different parts of my journal. But then I added my own flare as I went, and to be honest, a good bit of my journal deviates from the minimalistic style of the original system. So here is my take on the bullet journal.

In the very front of my journal I have a letter to anyone who finds my journal, that will hopefully encourage said person to return it to me. 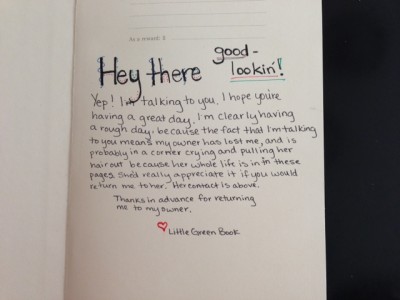 Next, I have the opening verse to the Liturgy of the Hours (more details on this in my next post) followed by my index. 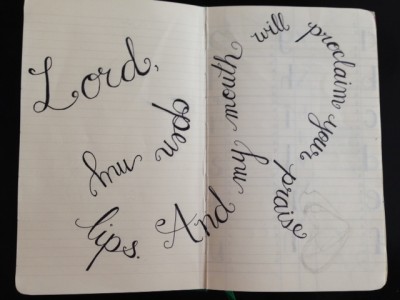 I have a list of signifiers that I’m still working out.

My monthly and weekly logs were inspired by YouTube videos. I would try to commit to one style for a week and then decide if it worked. I wish I kept track of the videos that were my inspirations so that I could give them credit. I just searched “bullet journal __(part of journal)__” and clicked through the videos. 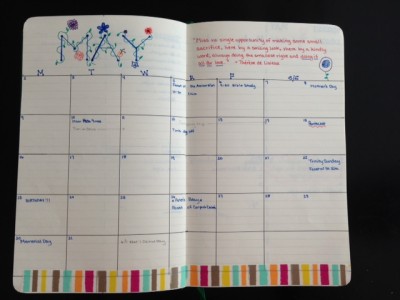 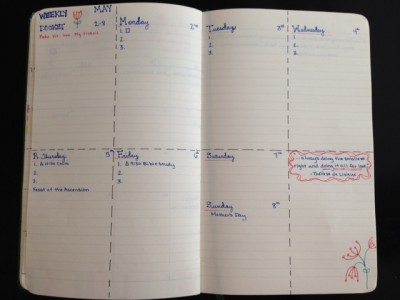 Another way I added my style is how I decorate. I wanted to keep supplies to a minimum for simplicity sake. I usually just have my journal and a black pen hanging around. Sometimes I use a pencil because I have commitment issues when writing things down. I have a pouch of pens for doodling when I can take time for it. I really enjoy this part, but I don’t want to pressure myself into decorating each new page so I add decoration as I’m inspired. I did finally splurge for some washi tape because I wanted to know what the hype was all about. 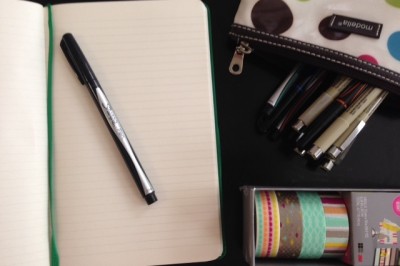 I’m still figuring out what works and what doesn’t. I’m planning an update post, so stay tuned. 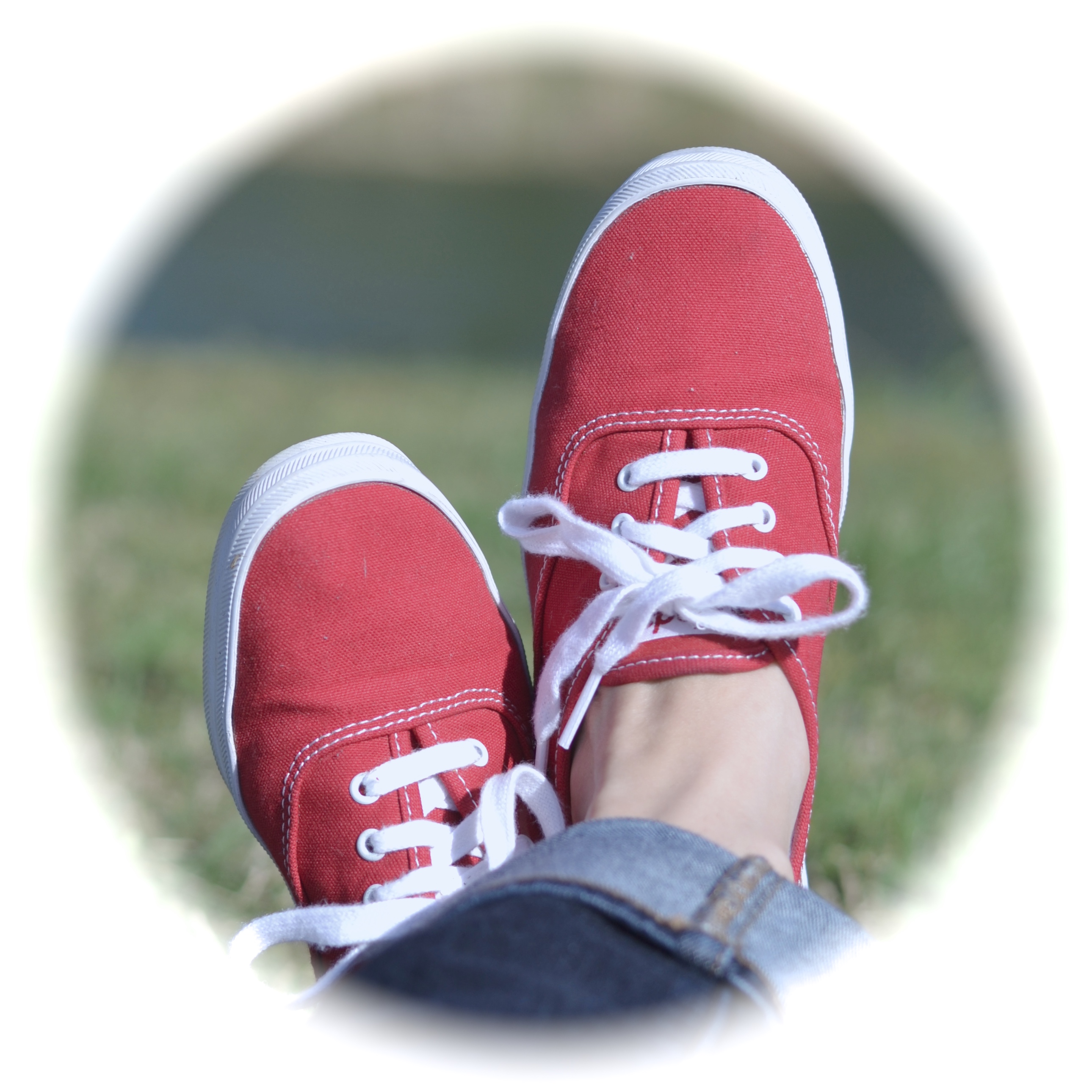